Whether traveling for business or pleasure, thank you for Checking MKG First! MKG's goal is to make your travel experience the best possible with friendly staff, a short commute, close proximity parking with the lowest rates in the region, fast check-in and security screening, and a quick return of your luggage at the end of your trip. Best of all, it’s a short ride home from the airport. Who doesn’t love that after a long day of travel?

Our newest hub at Chicago-O’Hare launches in October, with daily service to Muskegon, Michigan              Southern is the only US Commuter Airline serving America’s 5 Busiest Airports!              New service from Imperial, California to our Phoenix hub to commence this Fall              Try our new flights from Jonesboro, Arkansas to both St. Louis and Nashville               Atlanta-Jackson service moves to the main terminal, Gate E-37, in late September
CHARTERS CAREERS FAQ CONTACT US

Your Hometown Airline to the World

From Nantucket in the east to Honolulu in the west, Southern Airways and its Hawaiian Brand Mokulele Airlines, comprise on one of largest commuter airlines in America.

Southern Airways Express, based in Palm Beach, Florida is a commuter airline serving nearly 40 American cities across five U.S. time zones.  Southern operates a fleet of over thirty aircraft, including the Cessna Caravan/Grand Caravan, the King Air Super 200, and the Citation Bravo.Founded in 2013, Southern has seen tremendous growth thanks to our commitment to the individual passenger, which is recognized in our company mantra, “Every Passenger, Every Day, Every Flight.” This mantra has encapsulated our thinking and our core values since Day One. When we started Southern Airways, it was literally an idea on the back of a cocktail napkin. More than that first sketch of a route map, though, it was the idea that people will notice and consistently choose an airline that actually cares about their happiness. (And in that first year of operating two nine-seat planes, we had to make sure that every one of those eighteen daily passengers left happy!)Now, nearly a decade later, Southern Airways Corporation operates one of the largest commuter airlines in the country, safely carrying hundreds of thousands of passengers per year. Southern Airways, along with its Hawaiian brand, Mokulele Airlines, fly over 200 daily departures stretching from Nantucket to Honolulu. Despite being the fastest growing airline in America, the Southern staff remains ever-mindful of those first days of the airline— we know we must take care of Every Passenger, Every Day, on Every Flight.Whether you’re connecting to a Southern flight from one our interline partners (American, United, or Alaska Airlines) or you’re simply hopping between two of our Southern-served airports, we look forward to welcoming you aboard.Onward and upward, 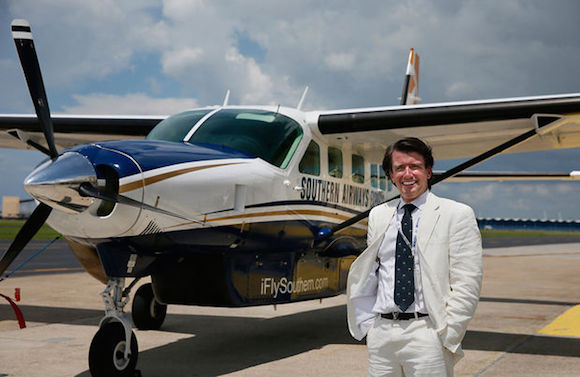