Born 1913 in Muskegon, Michigan, John F. Nims was an American poet and academic. In 1945, he received a Ph.D. from the University of Chicago. He published reviews of the works by Robert Lowell and W S Merton. He taught English at Harvard University, the University of Florence, the University of Toronto, the Bread Loaf School of English, Williams College and the University of Missouri, among others. Nims was granted awards and grants by the American Academy of Arts and Letters; the National Foundation for the Arts and Humanities as well as fellowships from the Academy of American Poets, the Guggenheim Foundation, and the Institute of the Humanities. He was editor of Poetry magazine from 1978 to 1984. John Nims died in 1999 in Chicago Illinois.

My clumsiest dear, whose hands shipwreck vases,
At whose quick touch all glasses chip and ring,
Whose palms are bulls in china, burs in linen,
And have no cunning with any soft thing

Except all ill-at-ease fidgeting people:
The refugee uncertain at the door
You make at home; deftly you steady
The drunk clambering on his undulant floor.

Unpredictable dear, the taxi drivers' terror,
Shrinking from far headlights pale as a dime
Yet leaping before apoplectic streetcars -
Misfit in any space. And never on time.

A wrench in clocks and the solar system. Only
With words and people and love you move at ease;
In traffic of wit expertly maneuver
And keep us, all devotion, at your knees.

Forgetting your coffee spreading on our flannel,
Your lipstick grinning on our coat,
So gaily in love's unbreakable heaven
Our souls on glory of spilt bourbon float.

Be with me, darling, early and late. Smash glasses -
I will study wry music for your sake.
For should your hands drop white and empty
All the toys of the world would break. 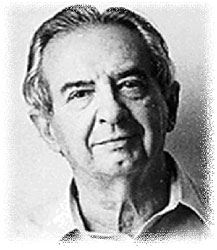